Hiroshima University is an integrated university with 11 undergraduate and graduate departments and 11 research divisions. Leading the world with top-class research and educating talented and innovative individuals, the university strives to contribute to the development of both Japanese and international society.

I made sure that the surface will become flat in the state which made a scissors frame be prolonged, so when being capable of carriage, store and development and developing by the easy structure, it's possible to get the scissors bridge system elastic structure which becomes the stable structure. 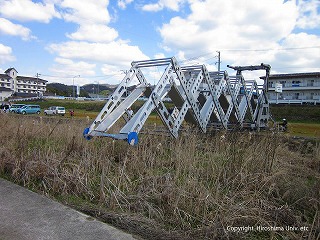